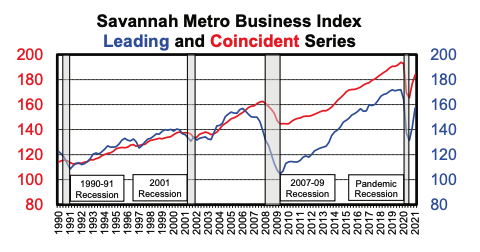 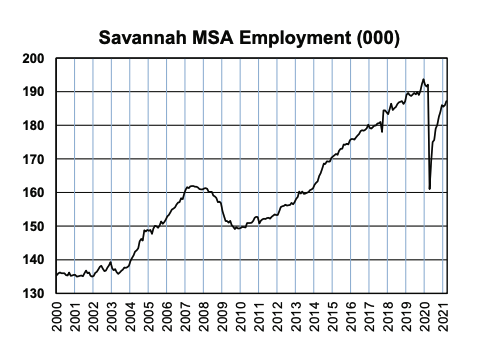 August 26, 2021 - Georgia Southern University’s latest Economic Monitor reports that the Savannah metro area economy surged for the third-consecutive quarter through the midpoint of the year.

The business index for the Savannah metro economy increased 3.4% during the second quarter, down from 17% annualized growth in the opening quarter of the year. The index increased to 190.3 from 184. Tourism substantially lifted the index as airplane boardings (+53%) and hotel room sales (+48%) registered massive one-quarter growth.

Employment in Savannah’s three-county metro area gained 1.2% (+2,200 jobs) rising to 188,400. Current employment stands at 99% of the pre-pandemic level in February 2020. Slightly more than 27,000 jobs have been added after the low of 161,000 jobs recorded in April 2020. The pace of employment growth is expected to slow somewhat in the third quarter, likely delaying reattainment of the pre-pandemic level to the fourth quarter of 2021.

In the service sector, business and professional services continued its rapid growth adding another 1,100 workers during the second quarter. Employment in the sector is 28,200 making it the largest component of the regional economy. The tourism and hospitality sector added 700 workers and has now recovered to 92% (with 24,400 workers) of its pre-pandemic level. Logistics added 200 jobs (+1.3%) and stands at 110% of its pre-pandemic level.

On the goods-producing side of the economy, manufacturing added 200 jobs rising to 18,000 workers. This is about 800 jobs shy of the peak recorded in fall 2019 and 94% of its pre-pandemic level in February 2020. As the tourism economy strengthens, additional recovery in manufacturing will accompany it because some businesses such as bakeries and breweries are classified as manufacturing firms, however, a portion of their sales are tourism-related. Construction employment was generally stable during the quarter with 8,600 workers.

Hourly wages in the private sector increased 1.6% to $21.72 from $21.38 in the previous quarter. Continued tightness in the labor market is expected to create upward pressure on wages in the third and fourth quarters. The private sector workweek lengthened by an hour to 34 hours (+3.6%). This is the longest workweek recorded since mid-2017.

The seasonally adjusted number of single-family homes permitted for construction increased 1.9%, rising to 579 from 569 units in the previous quarter. The second quarter number is 11.2% higher than its year-ago level. The average valuation per single-family unit, however, decreased 9.2% to $249,300 from $274,600. Note that the permit value does not reflect land costs of approximately 15% of permit value.

The Savannah area business forecasting index dipped 0.4% during the first quarter of 2021 following a surge of 53% in the opening quarter of the year. The index decreased to 156.8 from 157.5 in the previous quarter. The drop is explained primarily because of mixed results in the housing and labor markets.

In the labor market, there was a slight, but unexpected, uptick (+0.3%) in the average number of monthly initial claims for unemployment insurance (UI). New claims for UI increased to 4,740 from 4,727 in the previous quarter. Nonetheless, the seasonally adjusted unemployment rate during the quarter fell to 4.2% from 4.6%. The unemployment rate was 11.9% in the second quarter of 2020.

Near-term (six months) prospects for growth in the Savannah metro economy are favorable but remain modest. Regional employment is expected to match pre-pandemic level in the fourth quarter. Continued strength in the logistics industry, construction and land development will support the regional economy. Future gains will depend, in part, on increased travel to Savannah and the continued recovery of jobs in the hospitality sector that could be negatively affected in the third quarter by spread of the delta variant of COVID-19.

The Economic Monitor is available at the Center's website: https://parker.georgiasouthern.edu/big/big-programs/cbaer/.